← The Life of a Branch
Trilliums: The Dark Side →

Trillium: The Princess of the Forest

Pacific trillium (Trillium ovatum) is the only plant species with its very own festival at Tryon Creek State Natural Area (TCSNA). I suspect there are several reasons for this; First, trilliums have one of the largest flowers in the forest; Second, they are one of the earliest flowers in the forest, coming at a time when we are desperate for any sign of spring (although Indian plum (Oemleria cerasiformis) and the hazels (Corylus sp.) do bloom earlier than trilliums); Third, they grow right on the ground, where they are easily seen (no matter how cute bigleaf maple (Acer macrophyllum) flowers might be, if they’re 60 feet off the ground, who can see them?); Fourth, they’re pretty common, much more so than the dramatic but uncommon (at TCSNA) Columbia lily (Lilium columbianum).

Beyond the pretty flowers, these plants are interesting in a host of other ways.

The Life Cycle of a Trillium

The perennial parts of the trillium, the rhizome and roots, are underground. The above ground parts are only present for the spring, summer, and sometimes autumn. The annual scars on the underground stem (“rhizome”) reveal its age. Trilliums over 50 years old have been found in the western United States. The trilliums probably live longer than this, but very old parts of the stem tend to decay away. Thus, the true maximum age is difficult to determine.

The trillium goes through at least 4 different stages during its life. These stages look different, and are indicated in the chart below (all photos taken at TCSNA). After a trillium seed germinates, the plant will remain in the “cotyledon” stage for one, and only one, whole summer. (This amazes me!) As you can see from the picture with my thumb as a scale, the cotyledon is tiny! Next, the plant will spend one or more summers in the “one-leaf” stage. In this stage the leaf is typically no larger than your thumbnail. Finally, the plant reaches the easily recognizable three leaf stage. Typically, there is at least one year when a 3-leafed plant doesn’t produce flowers. Finally the plant reaches the three leaf stage with a flower.

Note that the plant may spend more than one year in the one-leaf, three-leaf and three-leaf with flower stages. It may also cycle back and forth between some stages, as indicated by arrows in the diagram.

Life Cycle of a Trillium 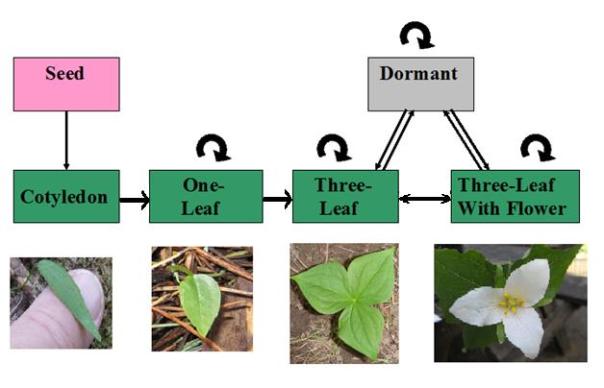 This symbol means the trillium might stay in this stage for more than one year.

Annual Development of a Flowering Trillium

Over winter, there are normally no above-ground signs of trillium. The first sign of the trillium in the spring is the emergence of a tightly rolled cluster of leaves on a stout stem, as seen below. Occasionally, you will see a trillium stem bent over in an upside down U-shape, and it looks like the stem is struggling to pull the leaves above ground.

Newly emerged trillium plants. On the left, the stem is struggling to pull the leaves above ground; in the right photo, the tight coil of leaves is upright, with a flower peeking out.

Eventually, the leaves unroll, and the flower opens in all its glory, as seen below. For the years 2014 – 2016, I have documented the first trillium flower at TCSNA. They are open enough to see the flower’s sex organs as early as March 2, and as late as March 10. 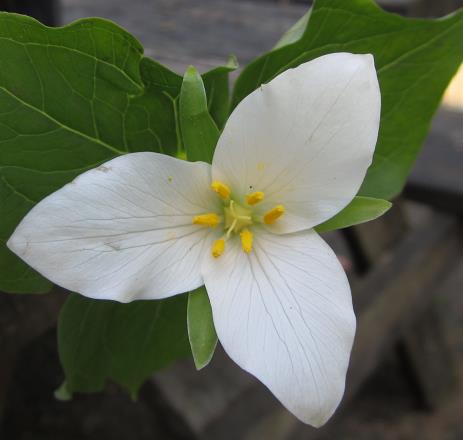 As the petals age, they start to turn a pinkish color. The intensity of the pinkness is extremely variable. One intensely pink flower is shown below. Based on observations at TCSNA, the petals generally start to turn pink approximately 2 to 3 weeks after they first open. The environmental conditions at any given location probably play a big role for any particular plant. This phase can be even more dramatic than the earlier white phase.

It’s All About Reproduction

The role of the flower, of course, is to produce seeds. Researchers have discovered that unlike many plants, trilliums do not produce nectar to attract pollinating insects. Apparently trilliums attract insects hungry for their pollen, some of which the insects then unknowingly carry to other trilliums.

At TCSNA, the trilliums don’t have a very high success ratio in producing seeds. In 2013 I took a survey of trilliums along two of TCSNA’s trails. Of 88 trilliums that produced flowers, only 33 produced any seeds. That’s a success ratio of only 37.5%. Not to worry though, studies in other areas have found similarly low success ratios. 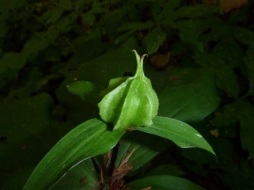 A failed, brown seed capsule, with no seeds.       A success: This capsule contains seeds

Even with seed successfully set in a capsule, the trillium isn’t home free yet! Trillium seed capsules contain a lot of energy, and hungry animals are always interested in eating more energy.

The result can be tragic for the trillium, as shown in the photo below, where the seed capsule has been clipped off, and presumably eaten, leaving just the stump of a pedicel (“seed capsule stalk”). Deer have been reported to eat trillium seed capsules, and other animals might as also. While this photo is not proof that something ate the reproductive structure, this is what trilliums look like when the flower or capsule has been eaten. A mid-summer survey last year of 99 trilliums at TCSNA that were not growing near a trail showed that 17% of those which had produced a flower had lost either the flower, or the seed capsule, to some animal. Their off-trail location suggests to me that the flower or seed capsules were not picked by humans.

Stump of the pedicel that held up the missing seed capsule

So we’ve got seed, now what?

By mid-summer the seeds are ripe and the capsules split open, releasing the seeds, as seen below. However, trillium seeds don’t have wings with which they can fly away in the breeze. Instead, each brown, round seed is attached to a blob of soft yellow stuff. Scientists call this blob an elaiosome.

Ripe trillium seed capsule which has split open to reveal the mature seeds, plus a photo of a single seed with elaiosome inset in upper right corner.

The elaiosome contains high levels of fatty acid. For humans, fatty foods are a no-no, but for forest critters, high fat foods are a high-energy treasure. Some arthropods, like ants and the harvestman (pictured below) are attracted to these elaiosomes. [Geek alert! This harvestman is NOT a spider, although there is an actual spider also called a harvestman!]

Harvestman coming to get lunch and spread the seed

The harvestman or ants grab a seed, take it to a safe place and chow down on the elaiosome. They have no interest in the seed itself, and discard it after their feast, which is most often at some distance from the mother plant.

The End is Near!

Having once produced seed, and stored enough solar energy as food for next year, the leaves have done their job. The leaves and stem die slowly and only the underground part of the plant overwinters. While many of the trillium leaves vanish in late summer, a few hang on until late fall, like the example shown below. 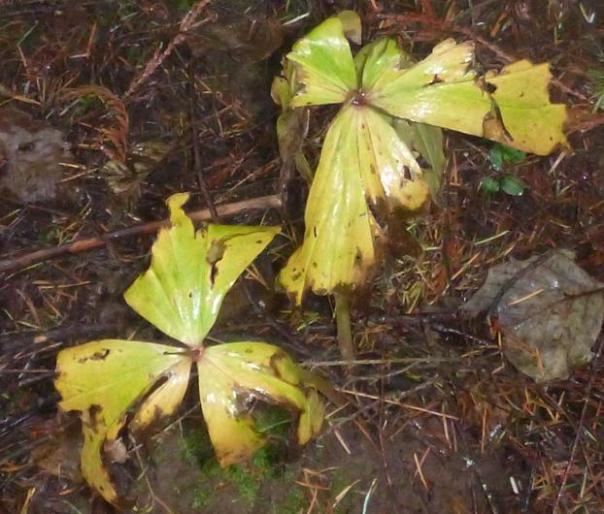 The trilliums of TCSNA bring us great pleasure with their spring beauty, and serve as a herald of abundant and diverse forest delights in the growing season ahead.

Posted on March 29, 2016, in Uncategorized. Bookmark the permalink. 3 Comments.

← The Life of a Branch
Trilliums: The Dark Side →

From the National Association for Interpretation

NAI R10 is a nonprofit professional organization serving NAI members in Alaska, Yukon, Alberta, British Columbia, Idaho, Washington and Oregon. Our mission is to inspire leadership and excellence to advance heritage interpretation as a profession.

Ranger's blog for state parks in the Columbia River Gorge